While we still have snow, I thought I'd post a picture of my view on the way to and from work. 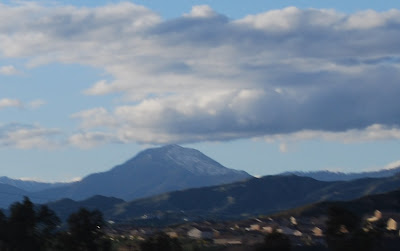 Wow, John, you're really on top of updating!

In the IRS 990 form for Grace To You for 2009 listed under "Contract Services" it's shown that GTY paid $667,000 to The Welch Group. What is The Welch Group and why is this of interest? It's interesting because The Welch Group is a corporation whose CEO/founder/owner is Kory Welch, John Macarthur's son-in law! Now do you think there could be just a little conflict of interest going on here? And just thinking out loud....but doesn't the Word admonish Christians to avoid even the appearance of evil?
http://www2.guidestar.org/organizations/95-3846510/grace-you.aspx#

Also of interest from the 990 form: John Macarthur's propaganda minister, Phil Johnson, was well compensated again in 2009 earning $225,000 while seven other board members earned in excess of $150,000. Oh I almost forgot to mention...who is the treasurer of GTY? Matt Macarthur, John Macarthur's son, while Macarthur's other son, Mark, remains a director. Just keepin it all in the family....

Want to learn the truth about a prominent false Christian who often poses as a Calvinist? Then read the articles on the following site:
http://www.thewatchmanwakes.com/